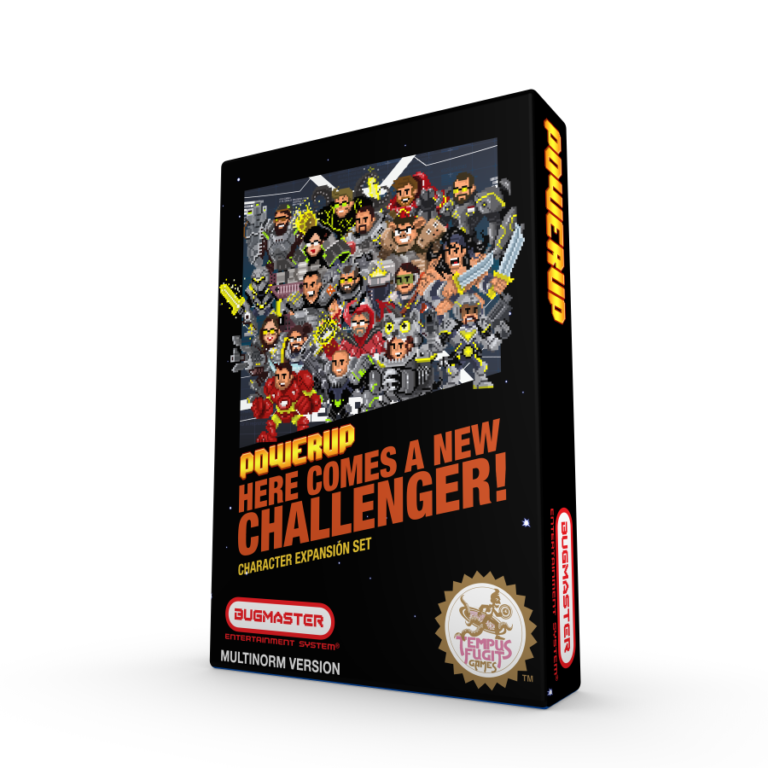 HELP! THE BUGS ARE WINNING, WE NEED NEW WARRIORS!

The fight between Bugbusters and  Bugs intensifies. To defend classic games, the Bugbusters will summon help from the bravest, toughest heroes of the 16-bit world. This expansion provides you with 39 new characters to add to your base game. In it you will find the strongest heroes, with new powers and abilities that will make you the Bugs worst nightmare.  These new characters can make your future DeathMatch games heart-stopping.

In this expansion we added 39 new characters that you can add to your games like BUGBUSTERS. These characters have some characteristics different from the usual ones in the base game. These are:

If the attack is made and the character has the STUN ability the character will lose 2 actions for the next turn. It can be cumulative up to a maximum of 4 actions.

If the attack is successful the attacker wins 1 life. He can not earn more lives than his maximum (3 lives)

If the attack succeeds, it deals damage to as many enemies as the number in yellow says, which are in diagonal squares to the objectives of the attack.

When the attack is made, it can be directed along the squares, but it can not reach more squares than the reach of the weapon. In addition, the attack can not overcome obstacles.

The character that attacks with the ability of charge adds 1 white dice to the attack for each space he has crossed before making the attack.

The character BERSERKER attack, if the attack is successful, you must advance a maximum number of yellow boxes and must make the target that takes into position to attack an additional attack. It does not matter if he is friend or enemy.

These characters move 2 squares instead of 1 with the action of moving. The jumping action continues to cost and having the same usual rules.

The character can divide his attack into as many parts as the yellow number. Attacks must be made from the same square and at the same time.

The character can float if he wants and not fall by gravity and can stay floating at the end of his movement. If the character is pushed or thrown, he can not use this ability.

The character makes a special action when attacking that is in an additional card that comes in the game. Use a yellow dice to see what the special action is.

This website uses cookies to improve your experience while you navigate through the website. Out of these, the cookies that are categorized as necessary are stored on your browser as they are essential for the working of basic functionalities of the website. We also use third-party cookies that help us analyze and understand how you use this website. These cookies will be stored in your browser only with your consent. You also have the option to opt-out of these cookies. But opting out of some of these cookies may affect your browsing experience.
Necessary Siempre activado
Necessary cookies are absolutely essential for the website to function properly. This category only includes cookies that ensures basic functionalities and security features of the website. These cookies do not store any personal information.
Non-necessary
Any cookies that may not be particularly necessary for the website to function and is used specifically to collect user personal data via analytics, ads, other embedded contents are termed as non-necessary cookies. It is mandatory to procure user consent prior to running these cookies on your website.
GUARDAR Y ACEPTAR